The first two expansions released as just Zombie Army in Germany due to its government's censorship of Nazi-related symbols.

The game takes place in an alternate timeline and spans four months, May-August 1945.

While enemy fire bombards Berlin, Hitler hides in his bunker. When an officer urges the Führer to surrender, Hitler-- unwilling to accept defeat-- shoots the officer and orders the execution of "Plan Z" to resurrect dead soldiers as zombies via occult rituals.

However, Hitler's plan backfires: the occult relic Hitler believed would protect him fails, and Germany is overrun.

As zombies tear through Europe, a group of resistance fighters (known as the Survivor Brigade) band together to stop the Nazi Zombie Army, end the apocalypse, and save humanity.

“In the dying days of World War II, Hitler’s final desperate act is to unleash his legion of undead soldiers upon an already ravaged Berlin.

Only those with nerves of steel and a steady aim stand a chance against Hitler’s Nazi Zombie Army!”

Chapter 1: Village of the Dead[]

“Germany is shrouded in darkness. Nazi zombies walk the earth. You are one of the few remaining living souls in Germany.

You have arrived at an abandoned village, en route to Berlin, hoping to find a working vehicle.”

“Berlin is burning and all souls remaining here are damned. The streets crawl with Nazi zombies.

Find the source of this unearthly scourge.”

“In a bid to seek out the source of the demonic evil, you have followed a tunnel deep into the earth under Berlin.

Somewhere in this sprawling underground facility lies the clue to salvation.”

“The Berlin Central Library contains a medieval occult text that may be the key to stopping the zombie invasion: The Book of Souls. You know what you must do.”

“Demonic forces have barricaded the U-Bahn subway tunnels that stand between you and salvation.

You must venture into them and brave the unspeakable horrors they contain if you are to find a way out of Berlin.”

Episode 2: BACK TO BERLIN[]

Hitler set this menace in motion. Perhaps the secret to its defeat lies in his fortified Führerbunker, deep within the heart of Berlin.”

The group’s tugboat is halted by a barricade, and they proceed on foot. They are later told that they need to return to Berlin in order to retrieve the Sagarmatha Relic, which is believed to be responsible for the outbreak.

Your successful escape from Berlin proves to be only temporary..."

"Berlin. If there is a beacon of hope amid the horror, then this city is surely the furthest from it.

Nevertheless, you must venture forth to the Kaiser-Friedrich Museum and recover the Sagarmatha Relic."

“The second piece of the Sagarmatha Relic is located at the very epicenter of this nightmare: The Führerbunker.

Hidden beneath the domed splendor of the Berlin Planetarium, the Führerbunker contains many dark secrets that will likely never be revealed.”

“The final piece of the Sagarmatha Relic is at a heavily fortified location outside Berlin.

Your best chance of getting there is by rail. Get to the Train Terminal and commandeer an engine.”

“The final piece of the Sagarmatha Relic is somewhere in the Flak Tower. Get it, signal for help, and get out of Germany!

You could be humanity's last hope..."

“Hitler’s undead troops gather in unprecedented numbers. The few survivors of this apocalypse have little hope.

With sniper rifles in hand, a select brave few dare to take the fight to the leader of the Nazi Zombie Army - Hitler himself.”

“Operation Red Harvest reduced much of Berlin to ash. But legions of Nazi Zombies still gather in the bomb-blasted ruins of the city.

However, there ARE survivors, trying to reclaim what remains of civilisation. They look to you for salvation. Do not let them down!”

“You know that Hitler is rallying his Nazi Zombie horde somewhere beyond the irradiated zone.

Get to his location and find a way to stop him - permanently.”

“Hitler’s strength stems from an ancient vault, sealed by a key kept in his mountain fortress, the Folterschloss.

To recover it, you must first traverse the ominous forest at the mountain's base, a forest mired in legends of the Impaler..."

"The Folterschloss - Hiter’s mountain castle. Getting in will not be easy. Getting out again will be harder still.

The mysterious keystone you seek is somewhere inside. What other horrors will you find within?”

“You have found Hitler’s army factory. If the Hellmouth truly exists, it is here.

Use the renewed Sagarmatha Relic to defeat Hitler and close the Hellmouth forever. If you can.”

Zombie Army Trilogy is based on Sniper Elite V2. However, the stealth focus is replaced with more traditional action from third-person shooters, including some arcade gameplay-elements. The scoring system for kills is expanded: as each player kills, points are tallied; in the new combo-system, successive kills grant a score multiplier. Whilst working together, players compete for the highest score, highest combo, longest shot, and most revives.

The player customizes their loadout before each chapter, though never starts with full ammo. Traps return and can trigger explosives to start devastating chain-reactions that damage hordes.

The ability to kick was added, allowing players to stun enemies and retreat or kill floored and weaker enemies.

None of the playable characters speak, so choosing characters only affects which ones appear in cutscenes.

The game occurs entirely in Germany, and several levels recycle areas from Sniper Elite V2: for example, Opernplatz appears in the latter half of Library of Evil, the docks from the Beginning of Kreuzberg Headquarters appear in Subway to Hell’s final standoff, and the Kaiser-Friedrich Museum returns in Gateway to Hell.

Unlike V2, Zombie Army Trilogy offers more varied environments, including a village and forest as well as more twisted and hellish environments (in contrast to the almost entirely urban setting of V2).

In 2017, Rebellion announced Strange Brigade, a four player co-operative shooter with a similar set-up to that of Zombie-Army Trilogy. 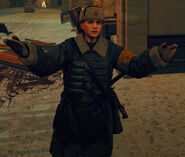 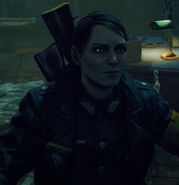 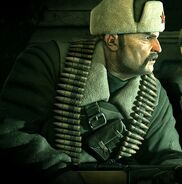