The Junkers Ju 88 is a German World War II Luftwaffe twin-engined multirole combat aircraft. Junkers Aircraft and Motor Works (JFM) designed the plane in the mid-1930s as a so-called Schnellbomber ("fast bomber") that would be too fast for fighters of its era to intercept. Like a number of other Luftwaffe bombers, it served as a bomber, dive bomber, night fighter, torpedo bomber, reconnaissance aircraft, heavy fighter and at the end of the war, as a flying bomb.

The Ju-88 only appears in Tower of Hellfire where a large formation of bombers fly overhead at the start of the mission. 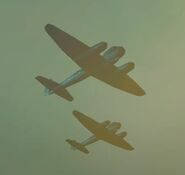 A Ju-88 flying over the player

The bomber formation at the start of the level