The German Army was the land forces component of the Wehrmacht, the regular German Armed Forces, from 1935 until it was demobilized and later dissolved in August 1946. During World War II, a total of about 13 million soldiers served in the German Army. Germany's army personnel were made up of volunteers and conscripts

the Heer infantry are the common enemies in the game, they are later replaced by the Red Army in later levels but still make short appearances

The most commonly seen troops of the Wehrmacht, they wear field grey uniforms with grey steel helmets and rifle ammo pouches (sometimes with scarfs) while some soldiers wears camo smocks and field caps also with rifle ammo pouches, they appear in almost every mission until they are replaced by the Red Army

Soldiers are usually equipped with MP40s and less commonly Gewehr 43 rifles, they usually use cover or rush the player sometimes throwing grenades

soldier with an MP40

German soldier with a rifle

German elites wear heavy dark green clothing with MP40 ammo pouches on their belt, German elites appear in the later missions of the game were they support the regular German infantry and can take more damage.

elite with an MP40

Sniper hide in high places an use scoped Gewehr 43 rifles, when

in close combat they strangely use american M1911 handguns, these soldiers usually have baggy clothing and assorted hats or wear masks over their mouth

German sniper with a scoped Gewehr

Infantry wear grey tunics wearing the standard Stalhelm (steel helmet). They either wear standard issue helmets, netted helmets or helmets with woodland camo, Sometimes they wear field caps. Heer infantry appear in almost every mission of the game. There's also the engineer version that had the same weapons like the Heer.

Infantryman with a Gewehr

Officers wear grey uniforms, usually adorned with the German Iron Cross medal. They don't participate in combat, unless in close quarters. They are equipped with the Luger P08, and some have collectibles on them. 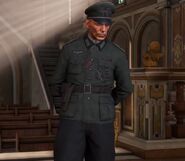 Snipers wear the brown khaki camouflage, had a hood on top of the cap and wear the balaclava mask. They held Kar98k or Gewehr 43 as their sniper rifles, and the secondary weapons are SMGs which is the MP40 or the FNAB. Same as other sniper from previous games.