Edit
watch 01:36
We're Getting Mutants in the MCU - The Loop
Do you like this video?
Play Sound

Elite Zombies are a fairly common sub-boss type enemy in Zombie Army Trilogy. Originally members of the Waffen-SS, these Zombies have been specifically created to be smarter, stronger, and much more deadly than their average brethren. Elite Zombies can take a lot of abuse; whereas a normal Zombie would be killed in a single headshot, it can take up to 5 direct headshots to kill an Elite. Explosives can deal a bit of damage, but similarly to headshots, they require multiple to be killed.

They also reappeared into Zombie Army 4 Dead War with some upgrades making them deadlier elite zombies to deal with and new clothing of the armed forces of the undead army.

Super Elite is a tall, slow-moving zombie. It carries an MG 42, as well as multiple belts of ammunition across his chest. It wears a helmet and a swastika armband on its left arm. One of only a few zombies with a ranged attack, he will slowly walk towards the players while firing his MG42. A player can be downed within a few seconds of direct fire from The Machine Gunner, so cover is very important when fighting them. 10 headshots with a rifle is enough to kill one. The bullets from the super elite are capable of killing any zombies unfortunate enough to be in front on him.

Chainsaw Elite are much rarer than the Machine Gunners. They are also much faster and chase the player with their chainsaw. Like Fire Demons, the Chainsaw elites will sometimes stop for a moment to rest. Strangely, if they are shot in the head, they do a dance similar to horror antagonist Leatherface before continuing their pursuit of the player.

Fire Demons are slow-moving fiery zombies that can summon ignited zombies or turn normal zombies into ignited zombies by getting hit by a fireball. While most of their original uniform has burnt away from the hellflames emanating from their bodies, their helmets, kit straps and belt buckles seem to be left intact. Before launching a fire ball or summoning more of their minions, they speak in an unknown language. 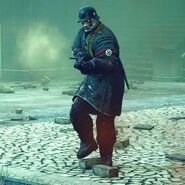