The German Afrika Korps or was the German Expeditionary Force in Africa during the North African Campaign of World War II, encountered in Sniper Elite III.

The Afrika Korps were deployed throughout North Africa, during the early days of the war. They were a powerful mechanized force and had multiple cities and bases under their control. Having troops stationed in Tunisia, Egypt, Libya and several other countries.

Although they focus on their African campaign on defending against the Allies with their Italian allies, some portion are lead by General Franz Vahlen to focus on creating the Ratte tank and defending Project Seuche's plans and resources. They are severely hampered by the sniper Karl Fairburne who is sabotaging the project and many died in the process. Some officers in Vahlen's army planned to defect to Hitler and exposed Vahlen traitorous action but killed by Karl. Soon, the forces that followed Vahlen is destroyed when Ratte Factory, their base is destroyed and their commander killed.

Infantry are the most commonly seen they carry G43 rifles and MP40s they usually wear headgear such as field caps, helmets and rounded hats and will sometimes be seen wearing shorts or with patches of sweat in the corners of their uniforms (it gets rather hot in the desert). 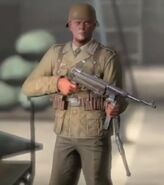 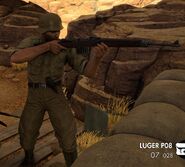 an Afrika Korps soldier with a Gewehr 43 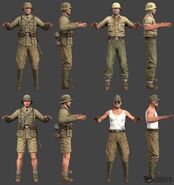 The Officers of the Afrika Korps are one of the highest ranking soldier to be in the Afrika Korps. The rank the Officer held is an Oberleutnant (First Lieutenant) and he is seen dressing tan uniforms, grey officer caps and also a few highly decorated awards such as the Iron Cross Second Class, Iron Cross First Class and the Knight's Cross of the Iron Cross with Oak Leaves and Swords. They mostly carry weapons such as Luger pistols or MP40s and they don't usually fight on the front very much but when they do, they can be seen leading small groups of infantry.

German Fallschirmjagers or Elites can be seen in the first few missions using Sniper rifles but then later come in large groups and use MP40 machine guns G43 rifles and deadly Panzerschrecks, they later completely replace the Infantry and Officers in last few missions.

Ghilie suit Snipers are serious threats, they wear large yellow Ghilie suits with grass and leaves tied into them they become almost invisible in the desert landscape and use scoped G43 rifles, when up close they draw Luger pistols.